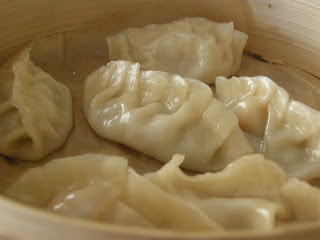 I had cravings for灌汤胶 and finally found a Chinese restaurant in the Netherlands which serves it. It is served as a dim sum and usually in a bowl with soup. You may ask, so what is the difference between soup dumplings and soup filled dumpling? Basically , both recipes require almost the same kind of ingredients , the difference is when you eat soup filled dumplings, the soup is coming flowing out from the dumplings itself and soup dumplings is just normal dumplings with soup in a bowl. So what is the secret is to keep the soup inside the skin? I did some research from the internet and finally found the secret ingredient that does the miracle is ‘agar agar’ 大菜/菜燕. Usually, we use this for desserts and it works like gelatin.

2 cups of flour
½ cup water
A pinch of salt


Bring the chicken stock and agar agar to a boil till the agar agar completely dissolves. Pour into a flat dish and let the mixture solidify. You can prepare this in advance. Mash the mixture with a fork or use a blender to cut it into small pieces. 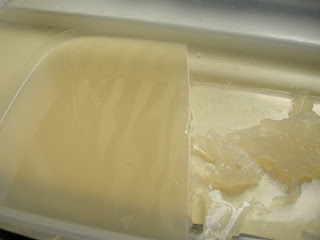 Mix the ingredients for the skin and knead into a dough. Knead the dough for at least 15 mins. The dough should be smooth on the surface. Cover it under a damp cloth and let it set for 15mins.

Mix all the ingredients for the filling in a big bowl and add in the agar agar mixture. 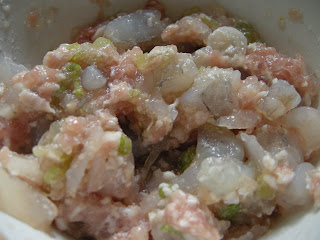 Cut the dough into 4 portions, roll out each portion to about 3 inches thick and cut into 4 small pieces. Use a rolling pin to flatten it into a rounded shape with a diameter of about 8-10cm.

Put a spoonful of filling into the center of the skin and seal it up tightly with your fingers. Please seal it tightly to prevent the soup from flowing out.

Apply a layer of oil on the steaming dish to prevent dumplings from sticking. 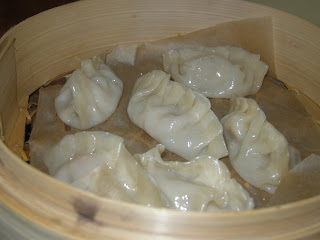 Steam the dumplings for 15-20mins. Serve hot with black vinegar. 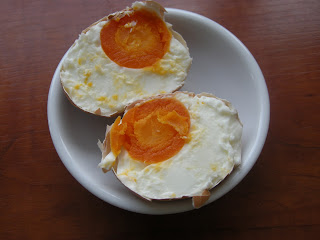 Salted eggs (咸蛋) I caught a cold a few weeks ago and have no appetite. All I wanted was just plain porridge with salted eggs. Unfortunately, salted eggs were inaccessible so I have decided to make it myself. It is really simple but you have to brine it for at least 4 to 5 weeks before consumption. I did not manage to find duck eggs so I use chicken eggs instead. Duck eggs tend to have a larger yolk but the end result is the same. Ingredients 10 large eggs 1 cup of coarse sea salt 4 cups of water 1 tablespoon of Chinese cooking wine (shaoxing wine) 2 teaspoons of peppercorn 1 teaspoon of cloves/anise Method Rinse the eggs and pat dry. Set aside. Bring water to a boil in a saucepan and add in the sea salt. Stir in the sea salt until it dissolves completely. Let it cool down completely. Add in Chinese cooking wine , peppercorns and cloves. Place all the eggs into a large glass container. Slowly pour in salted solution and make sure that the eggs are 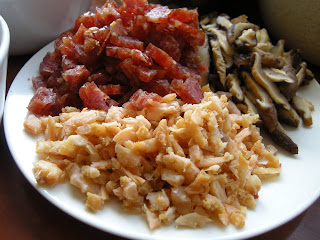 Lap cheong (chinese sausage), Tong Gu (chinese dried mushrooms) and Har Mai (dried shrimps) are all dried chinese ingredients. There are a handful recipes that requires the combination of these ingredients. It's typical Cantonese and Loh Mai Fun is one classic dim sum dish. I was amazed that I could get all these ingredients in the 'Toko' (Asian  supermarket) and inspired me to whip up this dish. P/S: If you wonder why there ain't any photos on the completed dish, that is because it was so good that I forgot to make a picture. ;-) !! Loh mai Fun (Sticky rice in Cantonese style) Ingredients:          Serves 4 persons 500g glutinous rice 5-6 pieces of shallots, finely chopped 1 chinese sausage (Lap cheong) , diced 100g peanuts –soak in water overnight 100g dried shrimps –soak in water then finely chop, save the water 50g dried Chinese mushroom –soak in water then cut into slices , save the water 200g pork or chicken - cut into fine strips 2 tabl 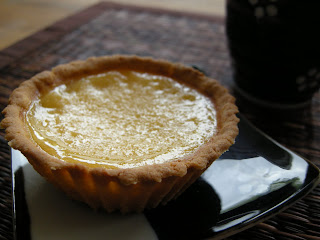 Home made Egg Tarts I had cravings for egg tarts for a while and decided to make some since the weather was terrible and I am 'trapped' at home with my 1 year old son. The egg tarts turned out to be delicious and my husband had one immediately when he came home after work. He said its better than those we bought from china town. I smiled and gave him a kiss. Here's the recipe. Makes about 16 egg tarts (using 8cm wide Tart Mould) Ingredients of crust: · 225 gm plain flour · 125 gm butter · 55 gm icing sugar · 1 egg, whisked · a dash of vanilla extract Ingredients of custard: · 4 eggs · 150 gm caster sugar · 300 ml hot water · 110 ml full cream milk · 1/2 tsp vanilla extract Method (making the crust): 1. Place butter at room temperature until it is soft. Cream the butter and sugar with an electric mixer over medium speed until the mixture is smooth, fluffy and light in color. 2. Add in whisked egg, half at a time and beat over low speed. Add vanilla extract, m